Dynamic Geomembrane Applications – What to consider

Some see geomembranes as static fluid barriers, which means they are not subject to movement nor are they expected to carry any load. This includes load induced by the geomembrane’s weight itself and any weight imparted onto the geomembrane by redundant protective layers. However, there are common situations where movement of the geomembrane is inherent to some degree in the application.

In this post, we will take a look at these applications.

Floating covers – Geomembranes are used as alternatives to fixed covers over liquid holding structures, which can be hard-shell tanks or basins or earthen impoundments. Generally, these are a part of a wastewater treatment process or potable water storage. Additionally, pure finished liquids, such as fertilizers, are sometimes stored in-ground with floating geomembrane covers.

The amount of movement of the floating cover is dependent on the operation of the facility and the design of the cover. Major movement occurs when the container is used as a hydraulic equalization basin in the case of wastewater treatment or as a diurnal storage vessel in the case of finished potable water. Floating geomembrane covers are barriers.

In the case of wastewater, they serve as a gas-tight cover of an anaerobic process or to keep odors contained. For finished water, a floating cover is used to maintain the integrity of the finished treated water, usually as part of the distribution system. 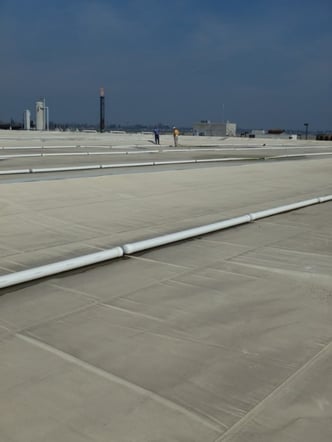 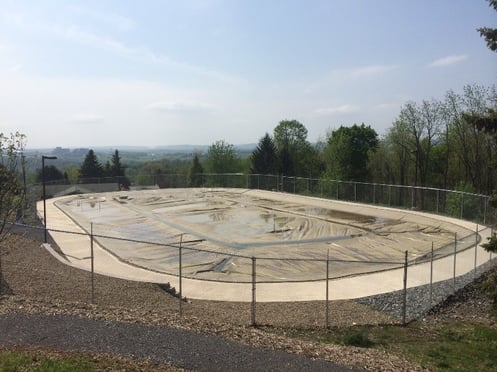 Movement of the geomembrane cover should be gradual, at high radius bending, depending on the configuration of the cover. Fluctuation is usually a result of filling/emptying of the vessel. In the case of gas, using the cover as an extremely large fluctuating gas holder often results in various problems related to the fluctuation itself and wind damage.

Floats, cables, weights and other ancillary supporting devices should be employed to maintain proper cover configuration and allow necessary bending in accordance with the properties of the geomembrane. Rigid polymers do not bend well and if tightly bended, damage can occur.

Flexible products, both reinforced and nonreinforced, can be subject to damage with repetitive tight bending. Consult the manufacturer.

Fixed or floating baffles – As with floating geomembrane covers, these are geomembrane applications in the wastewater treatment and potable water storage/distribution industry. In both applications, they are used to direct flow in a desired pattern to enhance treatment and/or to prevent stagnation areas (dead spots). Proper hydraulic design should have all flow parallel to the vertically placed geomembrane, but some amount of movement will still occur.

Again, high radius bending is desirable and repetitive tight bending is not.

Tank vapor barriers – Used as seals around the edges of floating hard-shell covers, these geomembrane applications are usually found in storage tanks containing highly volatile liquids, such as fuels. These vapor barriers are used in tight-bending situations.

Geomembranes used for these applications are highly specialized and are considered more of a gasketing application than a typical geomembrane application. 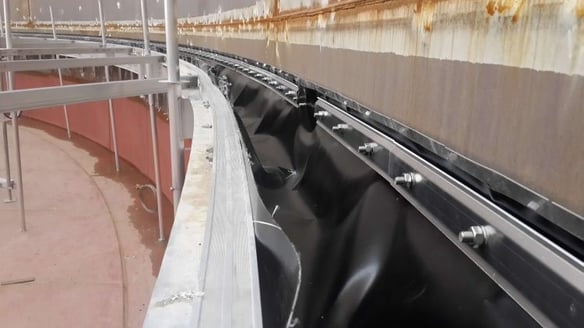 In summary, the most common dynamic applications for geomembranes are as floating covers and diversion baffles, both in the potable water/wastewater industry. Reinforced geomembranes with high-strength-to-thickness ratios are used extensively for these applications.

Learn more about the XR series of geomembranes.