Benefits of Using Embedment Strips to Attach Geomembranes to Concrete

Nearly all geomembrane installations are fixed at the perimeter of the containment by burying the liner in an anchor trench or by attaching it to concrete (i.e., a collar wall, foundation wall, etc.). The standard approach for connecting the geomembrane liner to concrete is to use a batten.

In this technique, concrete lags are set (i.e., drilled) into the concrete. These are placed on 6" or 12" centers at an engineer’s discretion. A compressible material such as Neoprene or butyl tape is then placed between the liner and concrete, and stainless steel, like 316 SS, or aluminum batten strip, is placed over the liner, and the lag bolts are driven through the batten, liner, and anchored into the lag. The top of the detail is then sealed with a waterproof caulk (see Figure 1).

This approach is tried and true and the only option when using geomembranes on sites with existing concrete. However, when working with new concrete, geomembrane manufacturers have had an alternative approach available for some time now: concrete embedment strips. These are “beams” made of the same polymer as the containment liner. They’re embedded into concrete in order to provide a surface on which to weld the liner. Concrete mbedment strips are available in most geomembrane polymer types; while their dimensions vary from manufacturer to manufacturer, dimensions are typically around 1" D x 4" W x 10' long (see Figure 2). 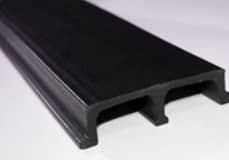 In addition to choosing the right concrete contractor, who will be pivotal in the installation of your embedment system, there are a number of other highly important considerations to keep top of mind when using concrete embedment strips:

Thermal expansion/contraction is most likely to occur in polyethylene (PE) embedments. At the other end of the spectrum, ethylene copolymer liners and embedments have a coefficient of thermal expansion that is roughly two orders of magnitude less than that of PE. Normally, the concrete embedment strip and the parent geomembrane must be the same polymer.

What is your experience with using concrete embedment strips as an alternative approach for attaching geomembranes to concrete? Tells us about it in the comments!