How Does a Geomembrane Hold Up 18 Months After It Is Installed?

In April 2016, I wrote about what I learned watching a geomembrane installation at the World’s Fair Park Lake in Knoxville, Tennessee. Those lessons were fundamental, such as the importance of a stable and well-prepared subgrade, why you should minimize field seams and the ability to get a flexible geomembrane to fit a serpentine basin. Now, it is over 18 months later and I checked on the working installation and can offer five observations:

A geomembrane represents an engineered alternative to natural materials, but like natural materials, there are lots of materials that will “work,” but often not many that will work properly. Consider the whole of the project along with the initial cost. This one is functioning well. 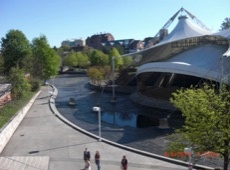 At the completion of Installation, April 2016.