Many in the geosynthetic industry believe a geomembrane is only a fluid barrier and, in theory, needs very little strength. Any strength requirements are met by ancillary means, such as additional geosynthetic members or other load-bearing members. But few installations can be assured—with complete certainty—that they will not require some load bearing from the geomembrane itself.

Floating Diversion Baffles—The baffles were in a large municipal facultative lagoon in Arkansas, which received high levels of industrial wastewater. Total baffle length was over 13,000 LF (4,000 m) at shallow depths of 4.5 ft. (1.4 m) to 5.5 ft. (1.7 m). Most of the baffle was in a single T-shaped configuration. The open impoundment allowed a high-fetch, or open wind distance, essentially allowing a “wall” of water, or higher wave action, to build against the portion of the baffle above the water line. The height of the water along with the wind load allowed a determination of the tensile loading on the length of the baffle. By reinforcing the baffle with high-strength cables designed to be the primary load-bearing member and with the high-yield strength of the XR-5® geomembrane used for the baffle, the problem was solved.

While this situation was wind induced, we have also seen situations where floating diversion baffles were placed too close or placed incorrectly relative to surface aerators that are generating wave actions similar to wind. Oxygen transfer to the wastewater depends on this disturbance created by the aerators so the typical solution is a more thorough design of the baffle system relative to the influence of the aerators, which may involve some modifications in the aeration system itself. 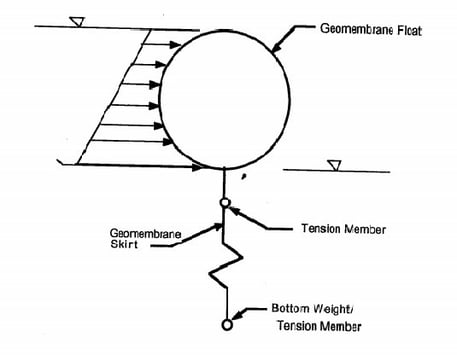 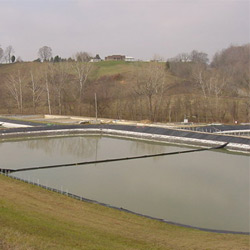 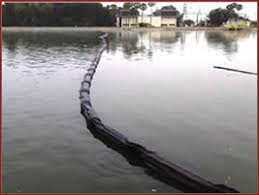 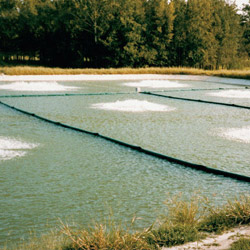 Fixed Clearwell Baffles (Curtains)—As opposed to floating baffles, these are still diversion baffles, but are normally suspended or fixed from the roof and fixed or anchored at the bottom of a potable water storage tank. However, the performance concept is the same with the baffle or curtain establishing a flow pattern that minimizes short-circuiting. Water typically enters the tank from a single point and exits from a single point, so the flow can be substantial at the entry point.

We recently encountered an existing baffle in a public water system in British Columbia that had high flow entering the tank and it was moving perpendicular to the curtain itself. No differential head was measured although the velocity head on the curtain was sufficient to cause damage to the floor anchors. Without that relief point, more damage could have occurred as a build-up of head increase occurred.

The problem was solved primarily by directing the incoming water 90 degrees to cause flow parallel to the curtain, and thus removing the increased head on the baffle. More robust floor anchoring was also installed, although likely not necessary. The first baffle in the diversion pattern was the only one that received the damage, as would have been expected. The XR-3® potable water geomembrane used for the curtains now functions well in all portions of the system. 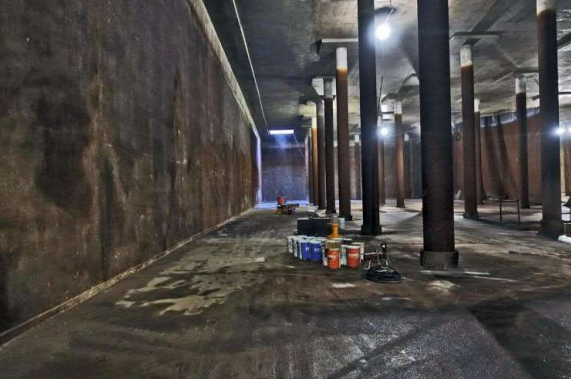 Consider external forces on your geomembrane often in the form of water flow or movement patterns. Select and design to overcome external hydraulic loads.

For more information on the XR series of geomembranes, go to our website.