Why EIA Outperforms All Other Geomembranes in Chlorine Resistance

EIA Geomembranes are a class of coated-textile liners like polyvinyl chloride (PVC), high-density polyethylene (HDPE), reinforced polypropylene (RPP), or chlorosulfonated polyethylene (CSPE), formerly known as Hypalon. Like RPP and CSPE, EIA Geomembranes are made by applying a polymer-formulated coating to a base fabric. The EIA coating differs from the others as it is formulated by alloying PVC with DuPont™ Elvaloy®.

Elvaloy appears in a variety of markets: electronics, medical, food packaging, and even as the modifying agent in polymer-modified asphalt (PMA) due to its heat resistance properties. Traditional plasticizers are low molecular weight, liquid, non-polar, and non-polymeric compounds. These plasticizers “lubricate” the contact points between otherwise rigid PVC molecules. Due to the physical properties noted above, these plasticizers are readily driven out of a PVC-based coating by UV, heat, and a number of aggressive chemicals (hydrocarbons for example). In contrast:

As a result of these properties, it is essentially impossible to remove the Elvaloy from the matrix (or alloy) that it creates with PVC. The final alloyed EIA coating has outstanding UV, heat, and chemical resistance, making it the most durable geomembrane on the market today.

In the highly oxidative environments of water and wastewater treatment facilities, superior chlorine resistance is a must. Not all geomembranes fare well in this environment. Reinforced polypropylene geomembranes, for instance, have been used in these applications (lagoon/tank liner, floating cover, and baffle/curtain) with disastrous results. When polypropylene is exposed to chlorine, the chlorine attacks the free alkyl group, degrading the propylene polymer chain. The last decade has seen numerous, catastrophic failure of reinforced polypropylene geomembranes across the U.S. as a result. 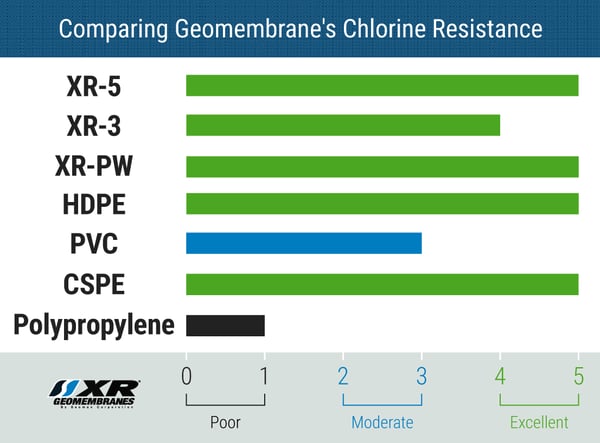 EIA-based geomembranes, on the other hand, have demonstrated excellent resistance to chlorine (and chloramines). PVC itself has good chlorine resistance. The resistance is enhanced by encapsulation with Elvaloy.

EIA’s outstanding chlorine resistance has resulted in it becoming the product of choice for use by several large press-stress tank manufacturers.

Interested in learning more about why EIA outperforms all other geomembranes in chlorine resistance, including reinforced polypropylene geomembranes? Contact us today to speak with one of our experts.

What other factors do you look for when specifying a geomembrane? Share your thoughts in the comments.