Druid Hill Park was inaugurated in 1860 and is listed on the National Register of Historic Places, totaling 745-acres (300-hectare) in size. Druid Lake was constructed (1863-1871) to provide a one-billion-gallon capacity, 55-acre (22-hectare) freshwater reservoir supplying the City of Baltimore and surrounding counties with drinking water. The lined temporary stone cofferdam was a critical component of a much larger, $164 million, five-year project to modify the existing Druid Hill Reservoir. 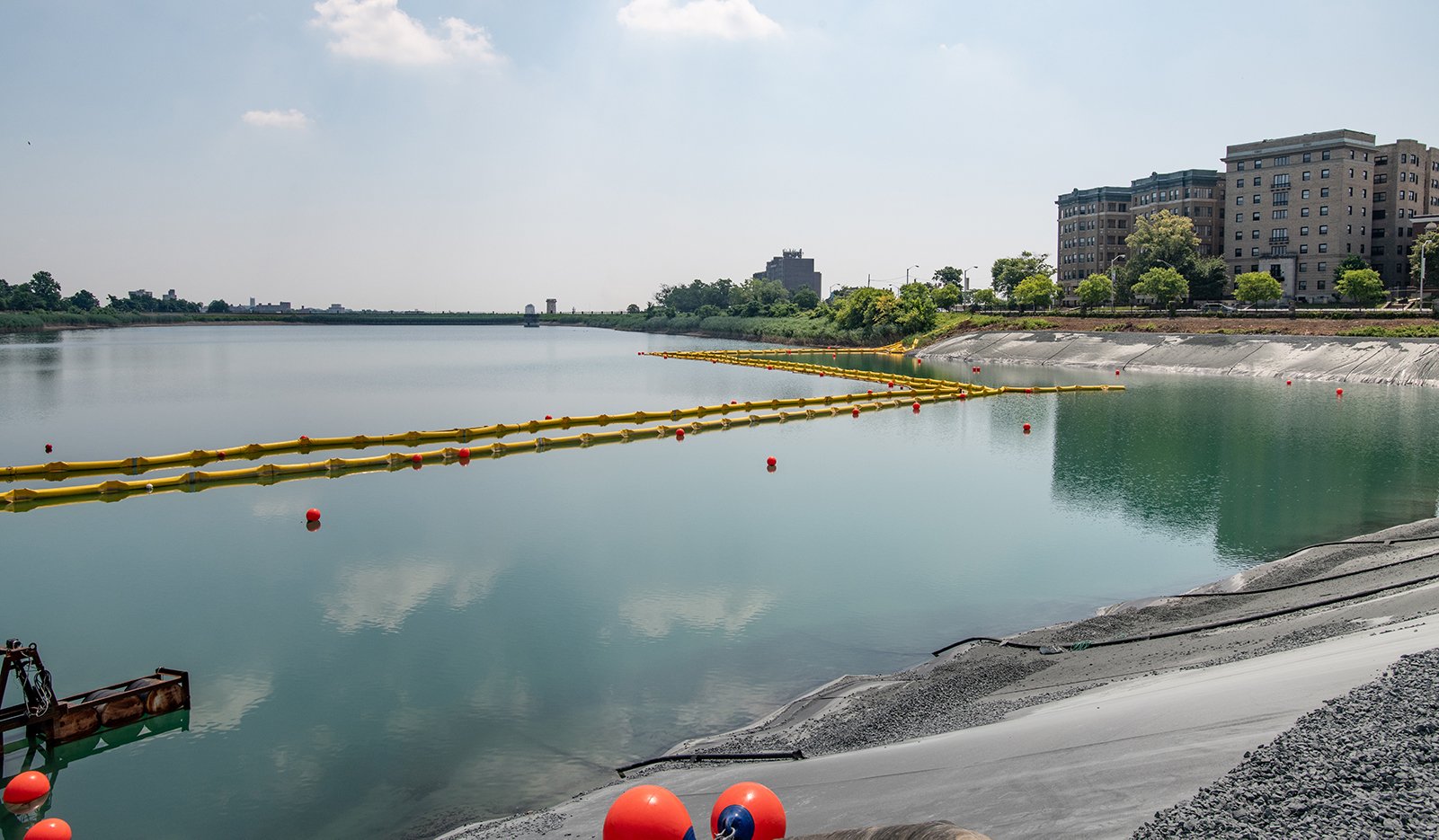 Due to new federal government drinking water regulations to keep drinking water protected from potential contaminants, Baltimore City decided to install two precast, prestressed water storage tanks (up to 167 meters in diameter) underground in the western end of the lake. The total lake area will be reduced by 6.3-acres (2.5-hectare) and will remain an ornamental lake in keeping with the existing Park setting.

The temporary cofferdam was needed to hold back and maintain the exposed pretreated drinking water for use by area citizens and create a barrier to allow dewatering of the western half of the reservoir in advance of constructing the underground storage tanks.

A proposal was made to install a temporary lining on one face of a stone cofferdam, which was 365 meters long. The stone cofferdam varied in depth based on the existing reservoir bottom, ranging from 0 to over 18 meters deep. A 40-mil reinforced potable-water-grade geomembrane (8138 XR-3® PW) was chosen and manufactured by Seaman Corporation. The liner was extremely puncture resistant to survive the installation process over angular riprap-type stone. Another factor in choosing this particular potable water geomembrane was its higher density and being heavier than water to allow for sinking of the liner. A double-sided geocomposite was installed directly on the stone cofferdam prior to installation of the liner. A piping system with hardware was attached to the leading edge of the geomembrane panels to assist with floating on top of the water. 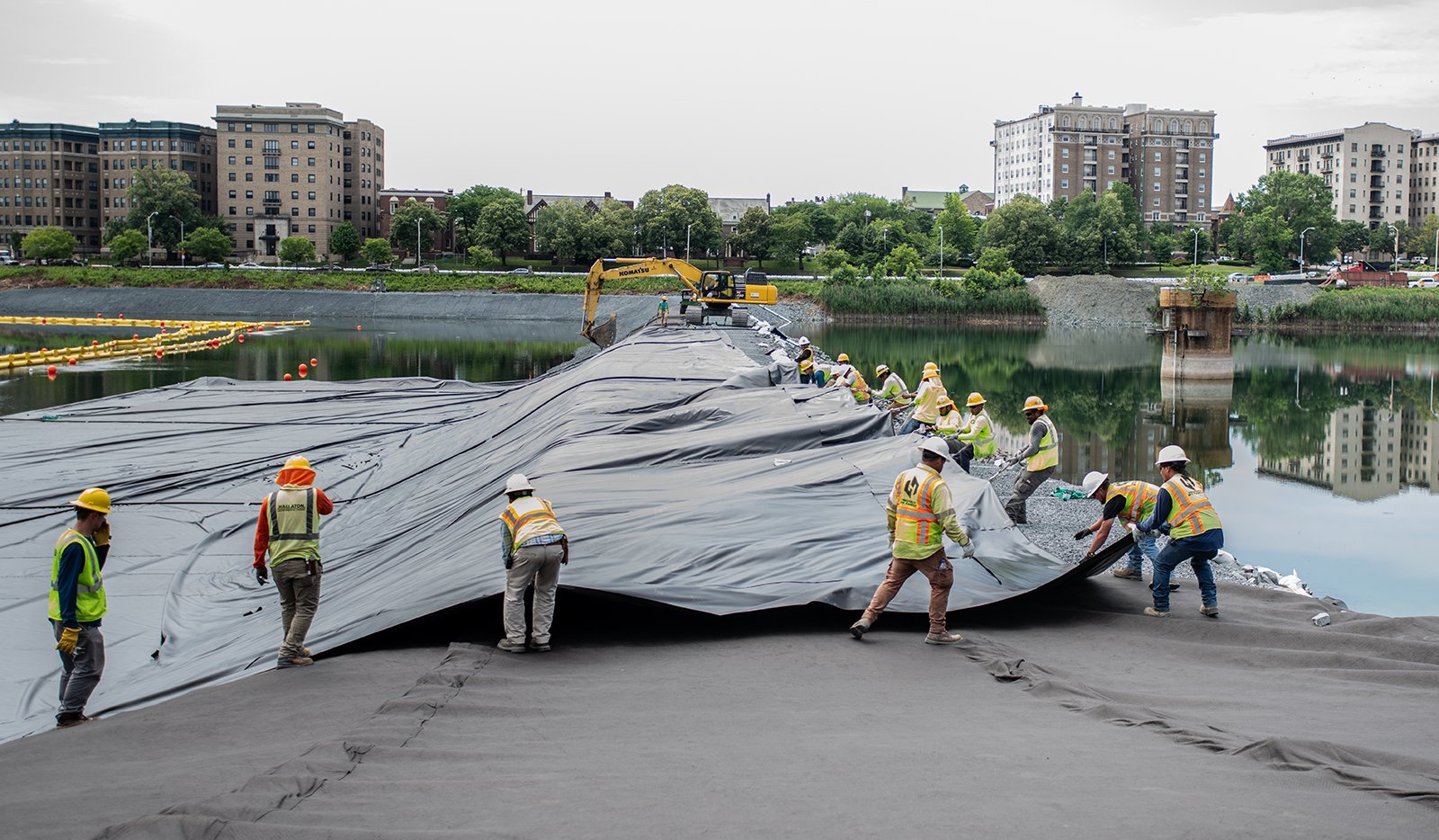 The installed stone cofferdam varied in length and depth over the entire area, which presented a big challenge. Each field-fabricated geomembrane panel varied in length and had to be measured and cut precisely to ensure the leading edge of the cofferdam would be covered after the liner system was sunk below the waterline. Another project challenge was keeping the liner afloat as it was incrementally being pulled out across the water and cofferdam, prior to being sunk into place. In case of heavy rains, multiple pumps were ready in order to keep water off the top of the floating liner.

One of the final challenges to ensure the successful installation of the liner system was the sinking of the liner. The installation crew worked systematically from boats to drill holes into the Schedule 40 PVC pipes located on the leading edge. Water filled the 15 cm (6”) pipes creating ballast at the leading edge. The liner system sunk to the bottom of the reservoir and cofferdam over the course of several hours. Then, divers were used to make sure the liner was in contact with the cofferdam below the waterline. 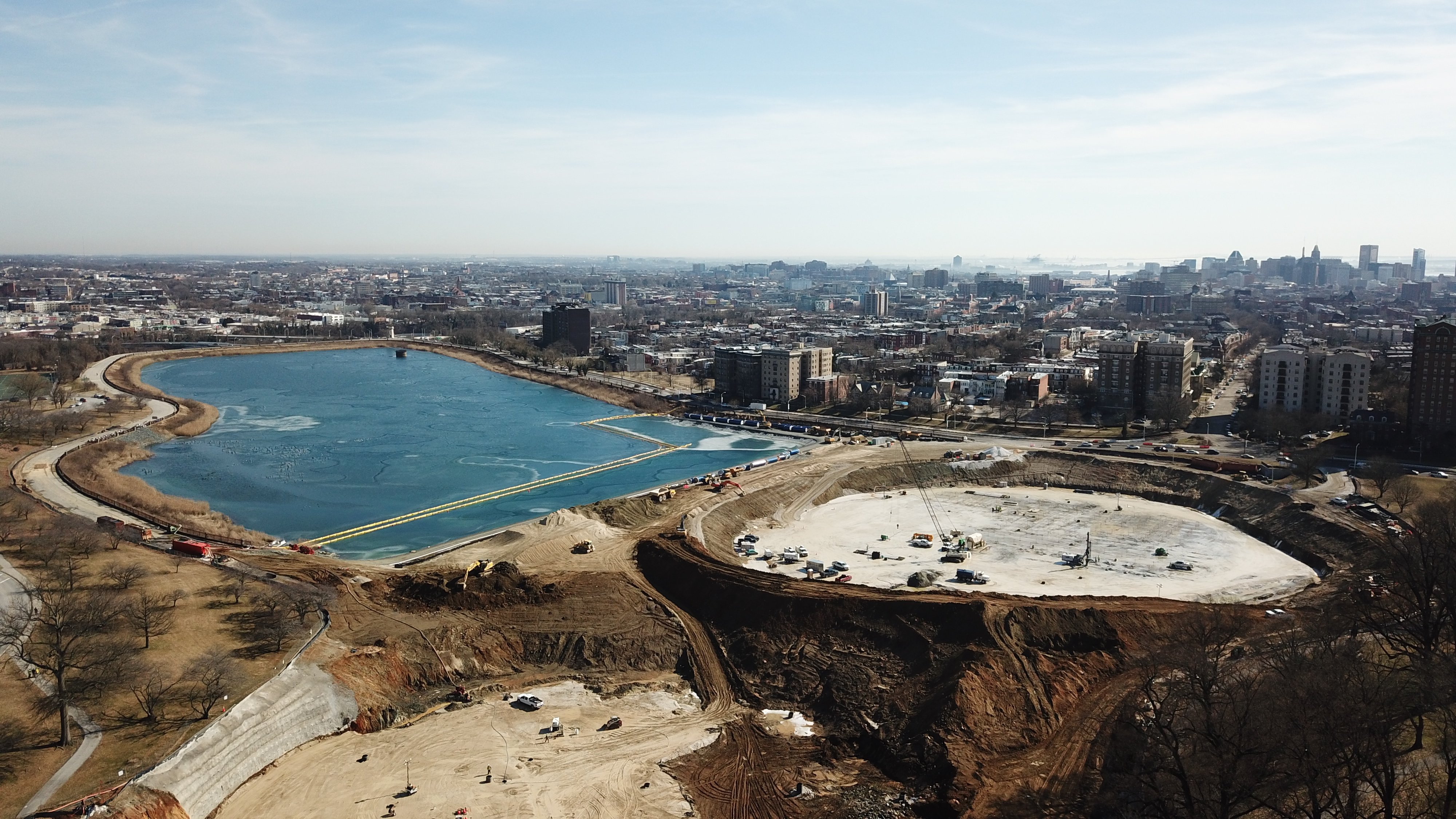 The geosynthetic liner installation phase was completed in just under two weeks. The overall Druid Hill Reservoir project is still ongoing and is scheduled to be completed in 2022. You can find the latest updates here.