Geomembrane systems are used worldwide in all environments. That includes hot- and cold- temperature applications, and both extremes present their own challenges. As designers, we look to laboratory testing to provide guidance on material properties that will tell us which products are candidates for certain applications. Cold weather workability is one of those situations.

There are primarily two widely used laboratory tests to measure cold weather workability for geomembranes: one is a bend test and the other is an impact test. While the challenge lies in the interpretation of the results of each test, let’s first compare the tests themselves.

ASTM D2136 – Standard Test Method for Coated Fabrics – Low Temperature Bend Test (Low Temp Bend). A geomembrane specimen is placed in a bending jig, lowered to a specified temperature and then bended around a specified radius. The test jig is shown graphically in the following figure.

The overall dimensions of the jig are approximately 8 in. (20 cm) high by 4 in. (10 cm) wide. Note the dimension k is the diameter of the hinge pin, which is the diameter of the bend itself, specified in the standard as 0.12 in. or 1/8 in. (3 mm). The bending action is accomplished by releasing the top half of the jig and allowing it to fall under its own weight, bending the test specimen. 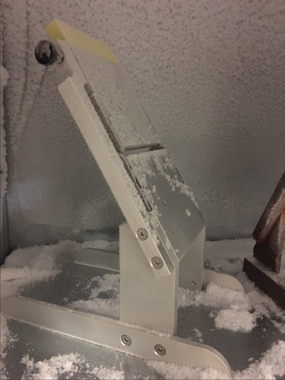 It is utilized primarily for plastics and elastomers. Specimens are secured in a testing apparatus, lowered to a specified temperature, and then struck at a specified linear speed. ASTM says, “the test provides for the evaluation of long-term effects, such as crystallization, or those effects introduced by incompatibility of plasticizers in the material under test.”

Other cold flex tests – Some other tests are mentioned in the marketplace and in the literature, but their use with geomembranes is not widespread. Some subjective testing is also found within broad standards. These are some of the tests noted:

What is the significance of the two main test methods?

1. This test is essentially a two-dimensional measure of bending at low temperature. It is repeatable and largely not operator influenced as the bend action is accomplished by the jig falling by its own weight rather than by hand.
2. Variability exists in the diameter, or radius, of the bend. Generally, the larger the radius, the lower the temperature at passing with no cracking. Take note of the radius specified by manufacturers.
3. We have found that in the field, multi- directional handling or loading of a geomembrane during installation or at other loading can create cracking at temperatures higher that those found in the laboratory. Merely walking on a geomembrane applies load in three dimensions. 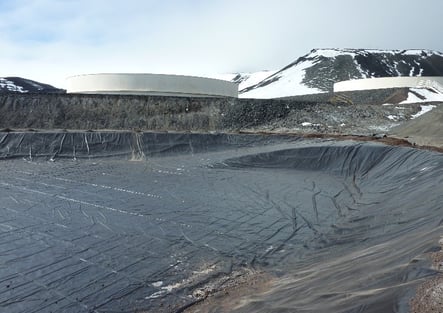 1. The test is only 50% accurate at the outset, establishing a temperature at a 50% passing.
2. In the geomembrane industry, this test method applies primarily to rigid products which are not subject to bending and thus the method receives limited attention.
3. Rigid geomembranes are not likely to be installed or flexed at extremely low temperatures, so an impact, or a breakage, is the closest estimate of cold weather workability. Lab to field scaleup would be difficult but this test does give some starting parameters.

Consider the geomembrane material and decide if a dynamic cold test is appropriate and which test gives some field performance prediction. Also consider that the results of these two tests are not comparable.

In part two, cold environments likely to cause geomembrane failures will be reviewed.