What are the key issues in writing “or-equal” geomembrane specifications?

What are the key issues in writing “or-equal” geomembrane specifications?

Part 2. An example of an “or-equal” spec gone bad and how it applies to geomembrane specifications.

A recent article in Civil Engineering Magazine titled “Who is responsible when a substituted product causes trouble?”1 detailed a project in Pennsylvania where the design was centered around a specific product but left opportunity for substitutes. The project was the installation of biological wastewater treatment equipment. The primary issue was the fact the consulting engineers designed a sequencing batch reactor (SBR) system, based on a commercial item, including all hydraulic appurtenances, piping, valves and more to support a specific piece of treatment equipment. Other products were listed as acceptable, but it was stated that the contractor would be responsible for the design of any modifications to the project to accommodate a treatment equipment substitution. Ultimately, an alternate was used. Because of the lack of changes in some of the influent piping needed for the alternate system, extensive costs were incurred, which resulted in litigation between the owner and the contractor.

The owner won on appeal, and the decision was supported by the American Council of Engineering Companies of Pennsylvania. Much of this article focused on the engineer’s role in specifying a product while leaving the door open to products they believed would work from a treatment standpoint. Both the article and associated comments to the online version of the article raise these questions:

In Part 1 of this series, we defined three types of construction specifications, one of which, performance, describes an item which will function in a given manner. Here is an example.

Several years ago, our XR-5 geomembrane liner was specified as a jet fuel secondary containment barrier for a construction project to line an existing bermed area at a Texas military base. The design called for the impermeable barrier to be left uncovered. The spec listed 8130 XR-5 and its associated properties with an “or-equal” clause. One of the bidders offered a crystalline polyethylene film as a substitute geomembrane. The Base Engineering staff reviewed the submittal, noting the type of geomembrane did not meet all the required geomembrane specifications. They issued an approval based on partial compliance with the construction specifications. The XR-5 geomembrane has very low thermal expansion-contraction properties and was to be left exposed. Conversely, the alternate product had very high thermal expansion-contraction properties and required a granular cover. The costs of the two systems were very close. But a very important site feature was neglected: The berm perimeter slopes were 1:1, and ballast won’t stand up on those slopes. Flatter slopes were not feasible due to cost, piping and site constraints. Geocells were also considered and rejected due to site constraints. The alternate was rejected. So, in fact, the geomembrane systems were not equal.

Could one conclude that this was a performance specification that used a brand name product to describe the desired performance, or was it an open proprietary specification? As the initial approval of the alternate geomembrane product shows, this was not a proprietary specification despite the listed brand name. Also in this case, potential problems with the proposed substitute were recognized prior to contract award, thus alleviating potential problems such as described in the Pennsylvania project detailed above. 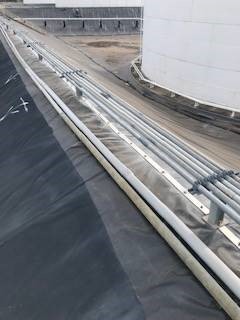 The more specific your construction specifications, the better. This approach leaves less room for interpretation and assumptions regarding the entire project and the impact of a given component. Don’t hesitate to indicate what is needed to accomplish a project’s goals.