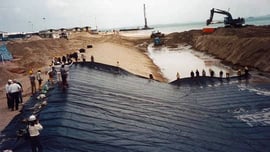 American humorist Will Rogers used to say, "Buy land; they're not making any more." In a nutshell, that's the problem the nation of Singapore spent $1.6 billion to solve.

When Sir Stamford Raffles claimed Singapore for the British East India company in 1819, it was nothing but a swampy, thickly jungled island populated by a handful of fishermen and sea gypsies. By 1911, the population of Singapore had swelled to 250,000 people of numerous races, mainly from China's southern provinces, Indonesia, Malaya (now known as Malaysia) and India, speaking a total of 54 languages.

Singapore became a British Crown Colony in 1945. But the impetus for independence led to self-government in 1959 as part of the Malayan Federation, and finally an independent republic in 1965.

Today, this tiny tropical nation of 225 square miles at the southern tip of the Malay Peninsula is home to nearly 3 million people. Flourishing Singapore now is the world's busiest port and a major center of trade, banking, tourism and communications. Yet all of this prosperity and growth ran headlong into the nation's immutable geography - it continued to be a low-lying island fringed with mangrove swamps.

But prosperity breeds big ideas, and there was none bigger than Singapore's solution to a problem encountered by nearly every city, rich or poor. The problem: trash - what to do with mountains of trash.

Want to learn more about how XR Geomembranes provided a solution for Singapore's solid waste disposal needs? Click on the button to download a printable copy of our case history: