We recently published a post taking a closer look at the two principal cold crack testing methods used in the geomembrane industry for index testing of cold weather workability. More appreciation for the test methods comes with better understanding the failure scenarios for the most common geomembranes used in arctic environments.

The previous post pointed out some shortcomings on the common test methods as one would try to translate those lab results into field performance. Failure as a result of a cold environment is typically the result of some sort of stress which induces a bending or out of plane action. So, let’s look at the five major ways that geomembrane system failures occur in a cold environment.

1. Transport – Special packaging may be required for geomembrane panels, or rolls, to be protected from movement when being transported to a job site in extreme conditions.

2. Unfolding, unrolling, placement – Where possible, geomembranes should be stored in a heated (or at least warmer than ambient) facility prior to being deployed. The unfolding of panels, which have 180-degree bends, will induce movement like ASTM D2136 except the load on the fold will likely cause a more severe movement. Similarly, stiff polymers will be even more stiff at extremely low temperatures, causing the need for special handling and increasing the chance of damage. 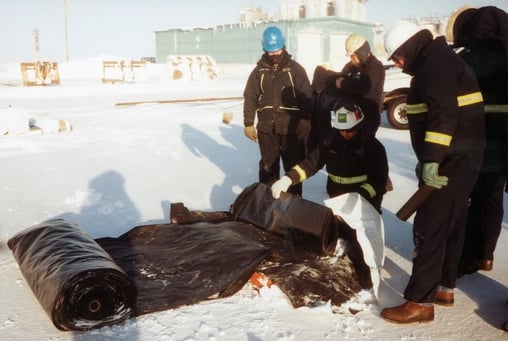 3. Field seaming, vehicle, and personnel – Field seaming requires technicians to be on the geomembrane and move about during the seaming process, introducing load and the potential for cold cracking. The use of prefabricated geomembranes will minimize the amount of field seaming and thus the potential for damage. Sources give various lower temperature limits for field seaming, but these are usually based on the polymer melting point limitations and not on the handling limitations, which can be much different.

4. In place damage – The previous three failure methods have all been related to installation of the geomembrane. Certain engineered controls are typically necessary to get maximum design life from the system.

So, what can happen after the installation is complete? Whether covered or uncovered, vehicle or personnel traffic can cause cold cracking due to flexing under load or in the case of a nonflexible material, shattering at very low temperatures. The solution is to normally handle traffic as if puncture is a concern, i.e., the use of walkways or walk mats, in those areas. Even during warm temperatures, these controls are needed.

5. Rapid crack propagation – Cold temperatures are a major cause of stress cracking in some geomembrane polymers. The phenomenon is caused by stress-induced cracking, which proceeds rapidly though a sheet of crystalline geomembrane, primarily high-density polyethylene. This is a problem with these products that has not been solved (Peggs and Kelly, 2020). In that article titled “Cold Weather Watch,” the authors point out that geomembrane stress cracking (in those products) probably cannot be eliminated completely and decreasing temperatures are an example of its cause. Noncrystalline polymers, such as ethylene copolymers and PVC modified for low-temperature use, are not subject to environmental stress cracking or rapid crack propagation.

Cold conditions can be detrimental to geomembranes. Make sure the product you use for containment is the right one for the application. 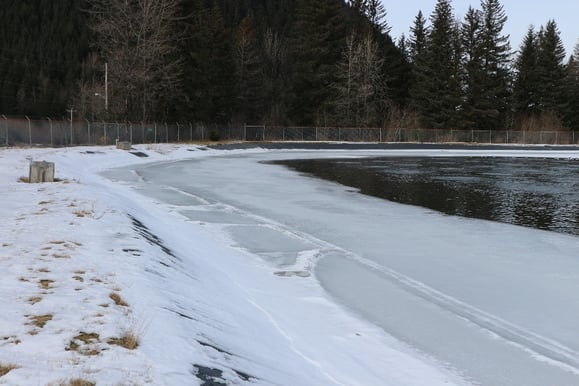 All photos courtesy of Seaman Corporation.