How do I use Polymer structure data to evaluate geomembrane selection?

How do I use polymer structure data to evaluate geomembrane selection?

In part 2 of our three-part series, we discussed contributing factors to a geomembrane polymer’s permeability. We also explored and explained the five factors influencing chemical resistance. In this concluding post, we look at different geomembranes and the main variables centered around their molecular structure, including density, crystallinity and thickness. Let’s start by noting how various commercial geomembranes vary in these categories.

Like dissolves like, but geomembranes often contain heterogeneous solutions which could be expected to partition in the sorption process. So, the polarity effect upon permeation may be altered from what is expected with pure solutions.

Solutes travel through openings within a polymer structure. So the denser the structure, the less area or volume is available for transport. The following table gives industry values for specific gravity for the geomembranes listed above. Note: Linear Low-density PE is shown instead of Low-density PE as it is the polymer more commonly used as a geomembrane.

The longer the flow path, the more differential pressure required for flow, resulting in lower permeability. More polymer is better when comparing like geomembranes, but often irrelevant when comparing different polymers.

To illustrate the conclusion of this series, consider two commercial geomembrane products: a reinforced ethylene copolymer (XR-5) and a polyethylene film (HDPE). Both have a manufacturer rating of “A” for containment of jet fuel, but when comparing permeability, the XR-5 tests substantially lower. In fact, the HDPE permeability exceeds U.S. Military standards for collapsible tank storage of JP8, the military equivalent to commercial jet fuel, Jet A. 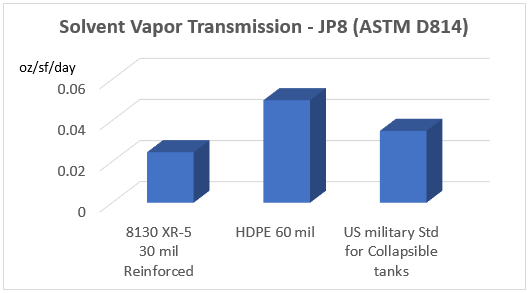 There are many criteria to consider when evaluating geomembranes; of those, barrier and chemical resistance properties are quite important. Evaluate the polymer, consider the contained liquid, and examine both the anticipated interaction as well as the anticipated performance. 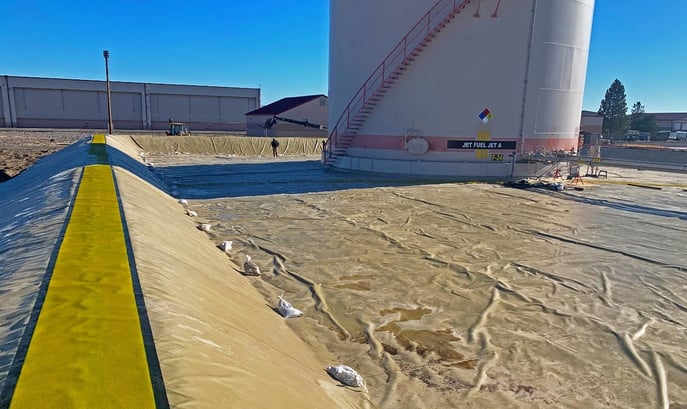