Municipal water and wastewater systems are considered to be one of the costliest assets for municipalities to maintain. Potable water safety and quality is not only a priority, but it is also a highly regulated necessity. In this four-part series, we’ll cover drinking water treatment processes, water sourcing, water distribution and how geomembranes can help improve quality, lower costs and increase efficiencies.

“I believe that water is the only drink for a wise man.”
Henry David Thoreau

While the treatment of water prior to consumption can be traced back to the Romans as early as 1500 B.C., widespread treatment in the United States and Canada was not implemented until the late 19th century. In ancient times and even in the early stages of water treatment, the removal of turbidity was the primary focus, as it was a visual indicator of raw purity.

Many of the early efforts in the improvement of potable water were centered on water supply. As cities grew, more water was required, and, often, finding cleaner water involved acquiring water from sources increasingly distant from the populations. Ultimately, the distances were impractical, and the quality was questionable.

More recently, a major contamination event occurred in 2000 in Walkerton, Ontario, prompting more attention to drinking water in Canada. Then in 2014, as widely reported, lead-contaminated water was discovered in Flint, Michigan’s, water supply at unacceptable levels.

The State of the Industry Today

With health and well-being as primary concerns, water treatment has undergone significant advancements, including a progression to chlorination and even more engineered physical chemical treatment processes to remove suspended and colloidal solids. Today, advanced processes to remove dissolved metals and extremely low levels of organics are becoming more common. The ability to analytically detect those very low levels has been a major technological advancement.

According to the 2017 American Society of Civil Engineers (ASCE) Infrastructure Report Card, 92% of the population in the United States is served by about 50,000 Community Water Systems (CWSs), which are defined as public water systems that supply water to the same population year-round. The remainder is served by other means, including small private systems and private wells. As could be expected, large population centers also have the largest CWSs: 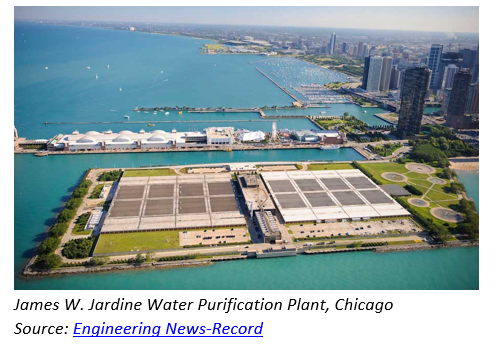 The output quality of drinking water is regulated in the United States by the EPA per the Safe Drinking Water Act (SDWA) and in Canada, Health Canada, through Federal-Provincial-Territorial oversite. The SDWA was first passed in 1974 shortly after the 1972 major rewrite of the 1948 Clean Water Act, which was the most comprehensive environmental legislation passed in the United States.

The Increasing Demand for Potable Water Quality and Capacity

The water and wastewater treatment industry is very large, estimated at more than $200 billion/year in the United States (treatment only). The infrastructure associated with water and wastewater is often considered to be the costliest asset owned by municipalities, attributed at least partially to the significant assets located underground in water distribution and wastewater collection, including underground potable water storage tanks.
Owners, customers and designers are always looking for ways to meet increasing demands for capacity and quality. Geomembranes often provide innovative answers to those demands and are used in the sourcing, treatment and distribution of drinking water to increase efficiencies and lower costs.

In part 2 of this series, the processes used in water treatment will be explored.