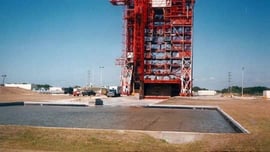 The existing catch basins at the Cape Canaveral Air Force Base in Florida were constantly leaking and causing maintenance problems due to cracking of the concrete. Brown & Root Service Corporation was called upon to design a liner system which could be placed over the existing 20-year-old concrete, left UV-exposed and become virtually maintenance-free. XR-5® geomembrane, manufactured by Seaman Corporation, was the obvious choice.

The holding ponds catch deluge water from Delta Missile launches, which contain liquid oxygen, hydraulic fluid and kerosene. With a filling schedule of approximately only 10 times per year, the basins are usually left empty and subject to Florida's glaring sun and extreme temperatures.

The XR-5, installed by Staff Industries, was fastened to the concrete in a grid-like pattern. Its resistance to UV rays, low coefficient of thermal expansion/contraction, and high strength properties made it the perfect solution. The XR-5 geomembrane can also tolerate strong winds, a deciding factor since Cape Canaveral is located along the hurricane-prone east coast. Another design consideration was the specific gravity of XR-5 (approximately 1.3 gm/ccm), which is higher than water and therefore less susceptible to float.