Municipal water and wastewater systems are considered to be one of the costliest assets for municipalities to maintain. Potable water safety and quality is not only a priority, but it is also a highly regulated necessity. In this four-part series, we’ll cover drinking water treatment processes, water sourcing, water distribution and how geomembranes can help improve quality, lower costs and increase efficiencies.

“Water is the driving force of all nature.”
Leonardo da Vinci

In parts 1 and 2 of this series, we explored the water industry and the actual processes used in water treatment. Generally speaking, there are three segments in the supply of potable water: source, treatment and distribution. This post will review the use of geomembranes for sourcing, as well as treatment—from raw water intake to the point prior to disinfection.

First, a review of geomembranes. Geomembranes are fluid barriers, designed to prevent fluids (primarily liquids) from passing to another area. They are considered impermeable if designed and manufactured for the specific application. The National Sanitation Foundation’s Standard 61 (NSF/ANSI 61) certifies the safety of treatment equipment coming into contact with drinking water. The standard covers coatings and other barriers, including geomembranes. In the United States, a geomembrane must have an NSF/ANSI 61 certification when used with potable water. Most countries have a similar method of approval.

Geomembrane Use in Raw Water Sourcing

Let’s explore how geomembranes can be applied in potable water sourcing.

Storage. In order to compensate for known or potential irregularities in supply, it is common to store raw water between the source and the treatment plant. This can be accomplished with the use of impoundments or tanks. Both are commonly lined with geomembranes to prevent fluid loss and are occasionally covered with a floating cover—or in the case of a tank, a fixed geomembrane cover—to maintain purity.

For instance, the City of Franklin, Tennessee, operates a 105-million-gallon raw water impoundment, which is fed from the Harpeth River. In the past, severe droughts caused disruptions in supply. So the municipality reworked and expanded an impoundment and lined it with 35 acres of XR-5PW/XR-3 PW Geomembranes. This material is NSF 61 approved, has long-term UV resistance and does not require granular cover to protect it from diurnal thermal expansion/contraction. Further details about the project can be reviewed here.

These images show the Raw Water Impoundment in Franklin, Tennessee, and the application of the XR-5 PW/XR-3 PW Geomembranes lining. 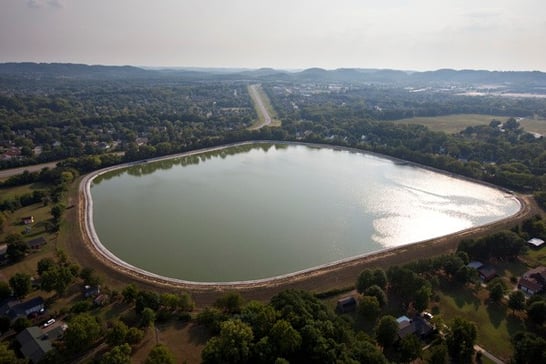 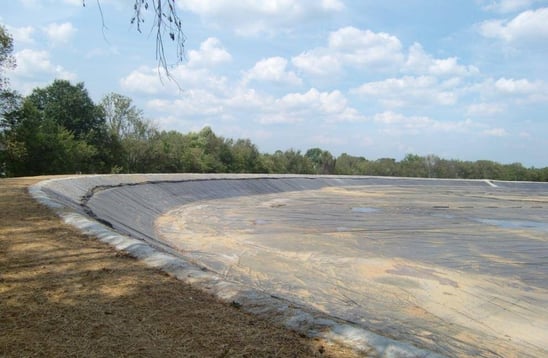 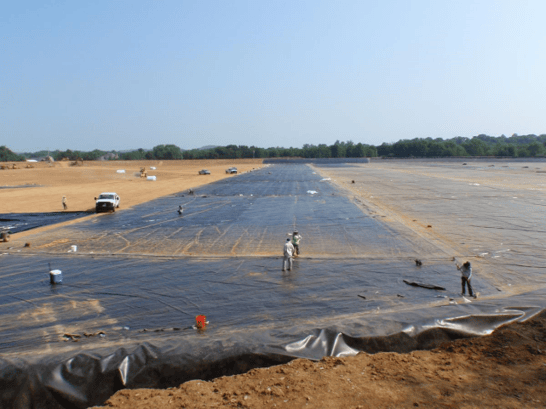 Baffling. A theme throughout the sourcing, treatment and distribution of potable water is “first in, first out.” In other words, short circuiting is undesirable. An economical and reliable way to prevent short circuiting in raw water storage is with floating baffles constructed of high-strength NSF 61-certified geomembranes. These baffles allow for settling of some large particles and further, if designed properly, can minimize floating debris that could eventually enter the screening step at the treatment plant. 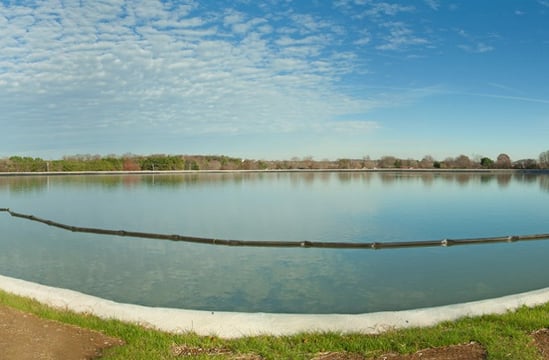 Geomembrane Use in Drinking Water Treatment (Prior to Disinfection)

Geomembranes are used in four primary areas within the pre-disinfection portion of a standard drinking water treatment plant:

Not mentioned as a primary area for geomembrane use are reverse osmosis systems, which are often used to improve raw water with high saline and dissolved solids. This process generates a permeate and a reject liquid, which are both very corrosive and require geomembranes with broad chemical resistance such as the XR-5 PW. Tank storage is common in this application.

Next up is the conclusion of this series, Part 4: Geomembranes for Potable Water Disinfection and Distribution